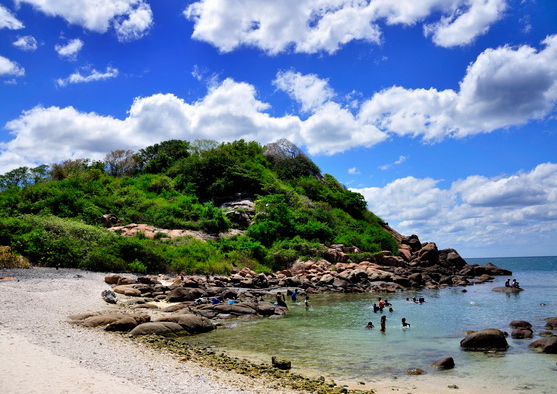 Journey to the land of beautiful beaches with Casons-Rent-a-Car. Trincomalee attractions range from magnificent monuments to natural wonders and of course the beaches that are famous for their crystal, clear and bright blue waters.
Trincomalee lies serenely on the east coast of the island. The most direct route would be the one via Ambepussa-Kurunegala-Trincomalee Hwy / A6 which covers 266 km in 5.32 hours. You can also opt for the 305 km route that takes you via Puttalam - Anuradhapura - Trincomalee Hwy within 5.42 hours.
If you wish to have a most relaxing tour to Trincomalee, we can arrange a driver / guide to take you there in our fleet of luxury vehicles that range from cars to vans, SUVs, 4x4 cabs and buses. Their expert knowledge on the best routes and excellent driving skills will ensure a most enjoyable and safe trip.
Travel to Trincomalee and make sure to visit these must-see sites;
Trincomalee Harbour
Also called Trincomalee Bay or Koddiyar Bay, the Trincomalee Harbour is one of the largest natural harbours in the world. Its strategic location played a pivotal role in the invasions of the Portuguese, Dutch and the British in Sri Lanka.
Koneswaram Temple
The Temple of the Thousand Pillars, as it is also called, stands magnificently on the top of a rock preface in Trincomalee. A most revered site amongst Hindus, the temple is dedicated to the God Shiva and was developed from 205 B.C.
Whale Watching
Over the years, Trincomalee has become famous around the world as one of the best destinations to go whale watching. The season lasts from May to October and in addition to blue whales you will also get to see sperm whales and dolphins.
Nilaveli Beach
The Land of the Moon Shine is the Tamil name behind Nilaveli Beach and it is aptly named so. With its pristine sands and mesmerizing blue waters, Nilaveli Beach is one of the most beautiful beaches in Trincomalee.
Fort Frederick
Built by the Portuguese in 1624 CE, Fort Frederick is still a working military base which is surprisingly open to the public. The fort was constructed using the debris of the world famous ancient Hindu Koneswaram Temple. You will be able to see plenty of colonial-style buildings, ramparts, cannons and bizarrely, deer!

You have any questions or need additional information?   Contact Us